Morningstar Marinas at Golden Isles has been awarded “Marina of the Year – Building and Growing” by Marina Dock Age. This is a HUGE accomplishment and couldn’t be more well-deserved. What GM Chris Ferguson and his team have experienced and achieved in the past four years is nothing short of legendary. This is no exaggeration and I will try, as briefly as possible, to sum it up below.

In 2016, our marina was hit with two back-to-back hurricanes (Hermine in September and Matthew in October). Hermine was especially nasty, but even with sustained high winds from the south on an outgoing tide that caused 4’ rollers to continuously beat the marina, we didn’t lose a single boat. The marina suffered incredible damage (114 broken sections, 70 floats missing, 10 piles gone), breaking the dock connection at almost every 16’ section, but it was all still floating (well, almost…we lost a section at the end of E, and at both ends of the transient dock.) Chris was able to scab together the marina in order to remain open for our customers, performing 90% of the work in house. Within a week, he was fully operational, pumping fuel with full electricity on the dock. 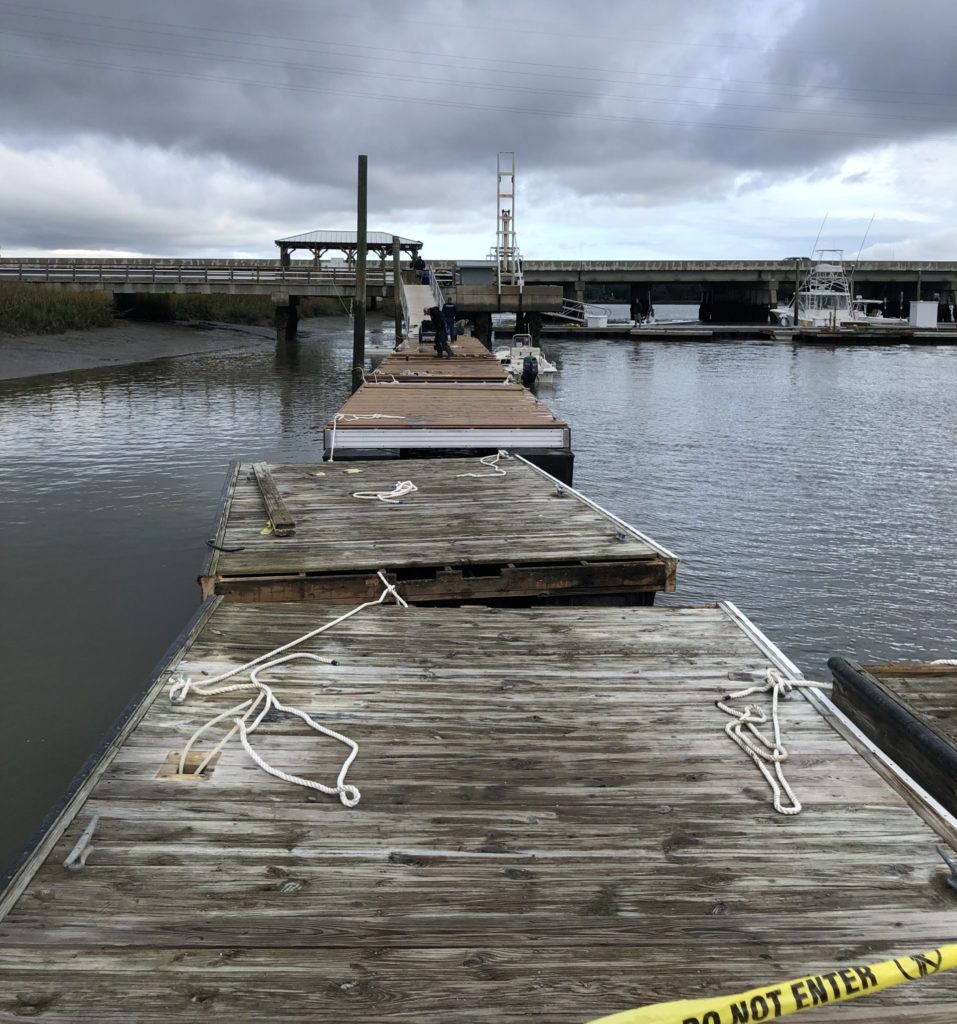 And then came Hurricane Matthew. In the hurricane aftermath equivalent of Ground Hog Day, Chris and his staff dug deep and worked tirelessly to make more repairs and remain open. Damage from two hurricanes in as many months was an insurance nightmare and throughout a daunting, lengthy claims process, Chris and his team kept the marina open, operating and in good spirits. It would have been so easy to complain, running a patched-together marina like driving a duct-taped luxury car, but Chris was relentlessly optimistic, creative and efficient, and his customers loved him and the marina all the more, not because the docks were great, but because he and his staff provide truly incredible customer service. As the insurance debate went on, with on-site meetings, calls and what seemed like endless discussions with contractors, insurance estimators and even consultants, Chris continued to run the business. We also started applying for Boating Infrastructure Grants, which came with question after question and request after request to Chris and his staff: “How many transient boats did you turn away last year? (Please start tracking)”, “How many gallons do you pump per transient boat? (Please start tracking)”, “What are the local attractions?” On and on and on went the tasks and requests and Chris still delivered the same level of service to his customers.

Just as it looked like we were going to put the insurance claim behind us and start rebuilding, Hurricane Irma paid Chris a visit in September 2017, just 373 days after Hermine. Three hurricanes all impacting one marina in 373 days, and not a boat lost. This is a testament to the extensive preparations our team performs before all major storms. As a reference point, the marina just south of us with beefy concrete docks, had seven boats sink, and the docks broke apart.

Once our insurance claims were processed, we got to work rebuilding the marina. The quotes we received for plain, basic wooden dock replacements far exceeded our insurance, and we didn’t want to settle for basic wooden docks for our customers. Chris continuously pushed for the best and his daily mantra was, “we only get one chance to make this right.”  So we got creative. We decided our customers deserved a custom Wahoo system with Ipe decking with fully upgraded electric, fuel and pump out and we were going to do whatever we needed to to make it happen. 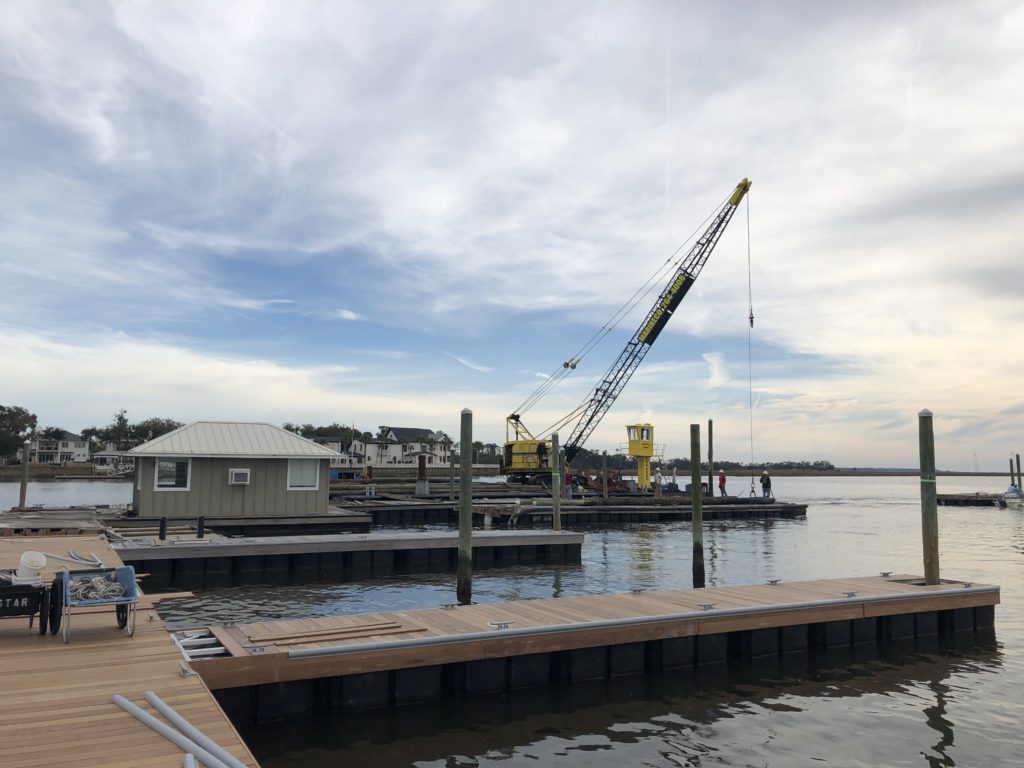 We obtained 5 federal and state grants, totaling more than $1M, and acted as our own general contractors and demolition/assembly crews to afford our docks. We donated, recycled or repurposed nearly 90% of our old dock system, and during demolition, our team pulled every strand of electrical wire and stripped them to sell the scrap copper wiring for an additional $30,000 in funds for the rebuild.

Working in phases to limit inconveniences to our customers, Chris and his team got into a rhythm of moving boats, demolition, receiving deliveries of new docks, and completing assembly around the piles already in place (no easy task).  In 2018, we finished the first two phases (the rack dock and the south basin) and you could feel the momentum building around the marina.  In March of 2019, we got our Big Grant – the grant that would allow us to not only replace our docks, but upgrade our transient dock to the first-ever Wahoo Category 10 dock system held in place with 36 concrete piles 18” square 70’ long, weighing a mere 20,000lbs/pile. The transient dock also incorporates large tubes attached to the bottom of the dock for the last 75’ that are filled with water to act as a baffle in severe weather. The grant we received had a deadline of October 2019 and Chris got to work on the biggest, most complicated part of the project. Not only was Chris going to rebuild the biggest slips and the longest dock (the transient dock is 650’ long), all the work had to be separated and tracked by individual grant, as no grant funding could overlap with any other grant and its approved workload. 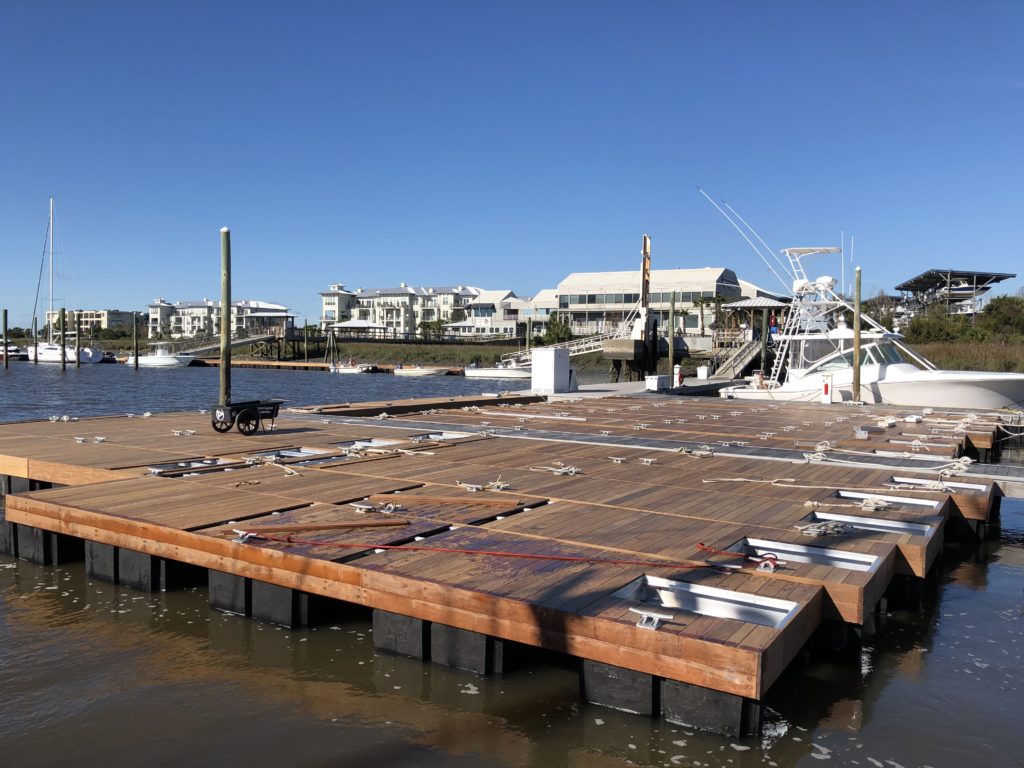 Chris and his staff were on track to complete the entire rebuild project by April of 2020…and then the world shut down in a global pandemic.

With a few month’s delay, the team delivered the complete marina rebuild in June of 2020, complete with a brand new dock office. There is a buzz about the marina and the momentum continues to build. The final act that Chris had to manage was closing a Coastal Marshlands Permit.  It’s fitting that the day he closed the permit was the day he was named Marina of the Year.

Three hurricanes, the insurance process, planning, demolition, assembly, utilities, dock office, five grants, and much more, and Chris and the Golden Isles didn’t skip a beat and delivered a top-of-the-line marina to match their top-of-the-line service with resilience and pride. It was an amazing run and there is no team more deserving than a Marina of the Year award than this one.

The Makings of a Great Transient Boating Destination

It’s that time of year: time to venture out on the water, exploring all that the Intracoastal Waterway – or ICW – has to offer. Many boating enthusiasts are heading out into the open water for some much-needed nautical adventuring. Of course, any traveling mariner understands that a comprehensive boating plan is the most important … Continued

How Much Do You Know About the 4th of July?

Test your knowledge about where your traditions come from and learn about some of our country’s strangest ways to celebrate its birthday.